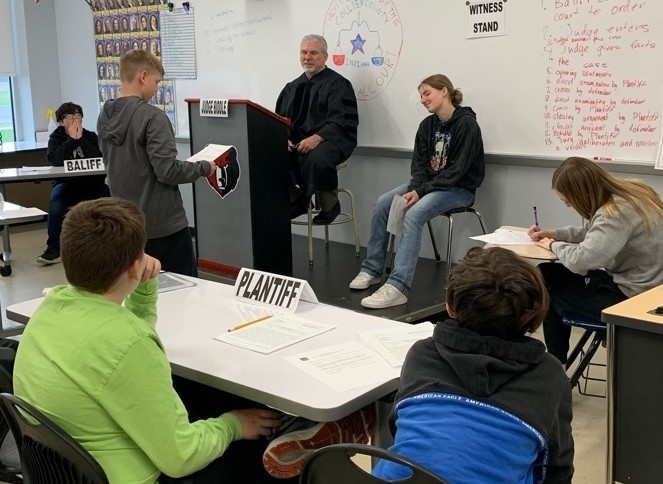 Students appear before the judge in BJSHS court

Students in Dr. Kevin Biddle's 7th grade civics class at BJSHS took it to the judge today. Students conducted  a mock trial taking on the roles of plaintiff, defendant, lawyers, bailiff, court reporter, and members of the jury.

According to Dr. (Judge) Biddle the class case was Jack King and Jill Hamilton v. Harvey Miller.  He explained, "Jack and his friend Jill went up the hill on Mr. Miller's property to get a drink of water from his well because it was so cold and tasted so good.  Unfortunately, they did not ask permission as they assumed he wouldn't mind.  Jack tripped over a rock, struck his mouth and needed to have the crown of his front tooth replaced.  Jill took a tumble after slipping on the wet mud and sustained two broken bones.

"Jack and Jill filed suit against Mr. Harvey for maintaining an attractive nuisance on his property and are suing for their medical expenses, lost wages, and $10,000 punitive damages for Jill's pain and suffering,"

"The litigants and witnesses gave sworn statements and we held the civil trial in our classroom today.  The student prepared for several days and did a great job as they learned how a trial works.  They did so well, we decided to take on a criminal trial next." added Biddle.

Blackford County Superior Court Judge Nick Barry will be visiting Dr. Biddle's classes on May 4 so students can learn even more about the judicial system and how the courts work.